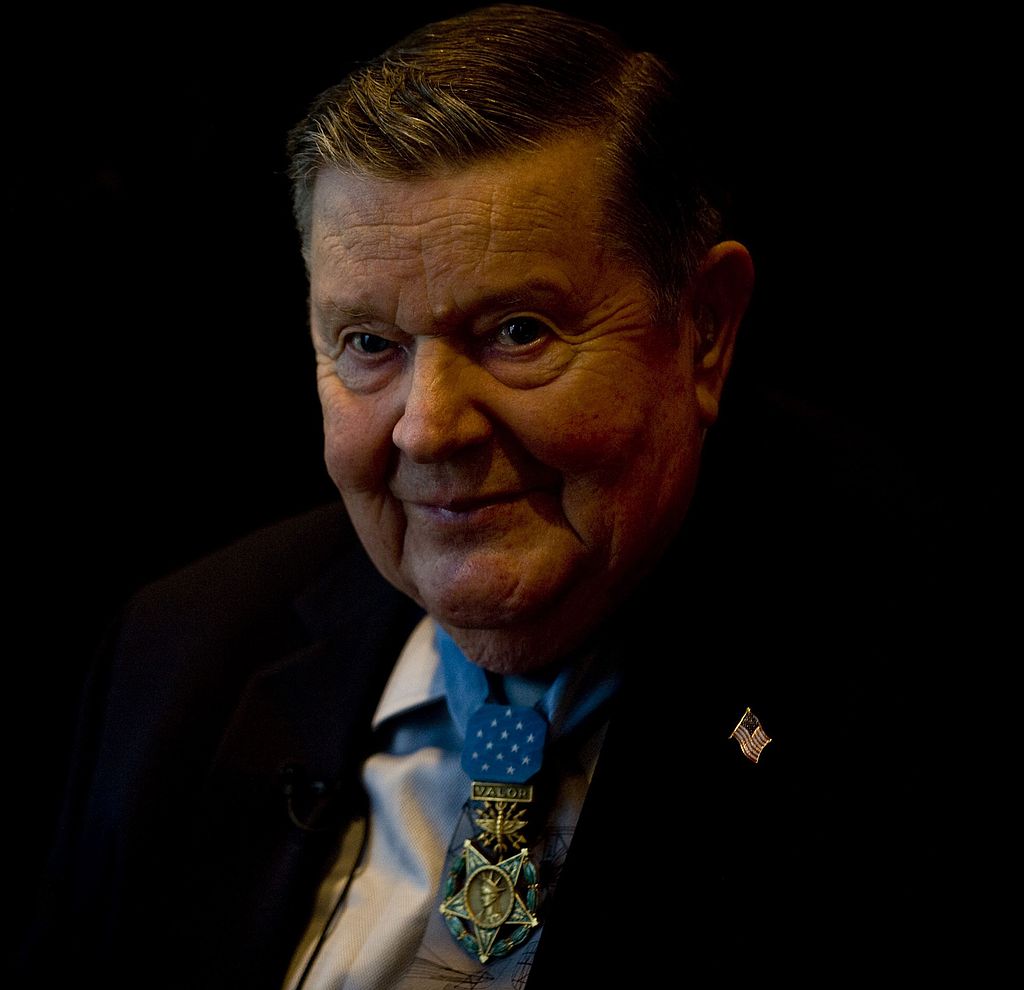 “For conspicuous gallantry and intrepidity in action at the risk of his life above and beyond the call of duty. Lt. Col. Jackson distinguished himself as a pilot of a C-123 aircraft. Lt. Col. Jackson volunteered to attempt the rescue of a three-man USAF Combat Control Team from the Special Forces camp at Kham Duc. Hostile forces had overrun the forward outpost and established gun positions on the airstrip. They were raking the camp with small-arms, mortars, light and heavy automatic-weapons, and recoilless-rifle fire. The camp was engulfed in flames and ammunition dumps were continuously exploding and littering the runway with debris. In addition, eight aircraft had been destroyed by the intense enemy fire and one aircraft remained on the runway reducing its usable length to only 2,200 feet. To further complicate the landing, the weather was deteriorating rapidly, thereby permitting only one air strike prior to his landing. Although fully aware of the extreme danger and likely failure of such an attempt, Lt. Col. Jackson elected to land his aircraft and attempt to rescue. Displaying superb airmanship and extraordinary heroism, he landed his aircraft near the point where the combat control team was reported to be hiding. While on the ground, his aircraft was the target of intense hostile fire. A rocket landed in front of the nose of the aircraft but failed to explode. Once the combat control team was aboard, Lt. Col. Jackson succeeded in getting airborne despite the hostile fire directed across the runway in front of his aircraft. Lt. Col. Jackson’s profound concern for his fellow men, at the risk of his life above and beyond the call of duty, are in keeping with the highest traditions of the U.S. Air Force and reflect great credit upon himself and the Armed Forces of his country.”

Biography: Joe Jackson, born on 14 March 1923, in Newnan, Georgia, was an avid model aircraft enthusiast in his youth. He enlisted in the Army Air Corps in March 1941, a few days after his 18th birthday, in hopes of learning more about aeronautics.

World War II: Nine months after he enlisted, the U.S. entered WW II and Jackson was assigned to serve as crew chief aboard a B-25 Mitchell bomber. As a testament to his early flight aptitude, he helped save his fellow crewman by assisting his aircraft’s pilot during an engine fire. Soon after, Jackson successfully completed Aviation Cadet Training and became a commissioned officer. He flew P-40 Warhawks and P-63 Kingcobras throughout the war, and ended the war at the controls of a B-24 Liberator bomber aircraft.

Korea and early Cold War: During the late 1940s, Jackson returned to flying fighter aircraft. During the Korean War, he successfully flew 107 combat missions in the F-84 Thunderjet. His accomplishments include:

Vietnam: After completing a staff tour in Europe, Jackson was assigned to fly the C-123 Provider over South Vietnam during the Vietnam War. While he flew 298 combat missions, it was his rescue mission on 12 May 1968 during the Battle of Kham Duc that earned him the nation’s highest award for military valor. On 16 January 1969, President Lyndon B. Johnson presented Jackson with the Medal of Honor at a White House ceremony. Also receiving the Medal of Honor that day was fellow Newnan native Stephen W. Pless, a Marine aviator who, like Jackson, had earned the decoration for an airborne rescue operation. Upon realizing that both Pless and Jackson were from the same small Georgia town, President Johnson quipped “there must be something in the water down in Newnan.”

Later Life: After Vietnam, Jackson served at the Pentagon before his final assignment as Chief of Strategic Forces Studies in the Department of Military Strategy at the Air War College from May 1971 until his retirement from the Air Force on 31 December 1973 at the rank of Colonel. Jackson continued to serve on active duty in the Air Force for several more years, both at the Pentagon and on the faculty of the Air War College. He eventually retired after 33 years of active duty service. He currently resides in the state of Washington. On 14 May 2010, NBC News highlighted his weekly contributions over 18 years to a local church that provides meals to the hungry.

{Excerpted from his Wikipedia Entry: https://en.wikipedia.org/wiki/Sammy_L._Davis} Early Years: Born in Dayton, Ohio, on November 1, 1946, Davis was raised in French Camp, California. His family had a long tradition of military service; his grandfather served in the...