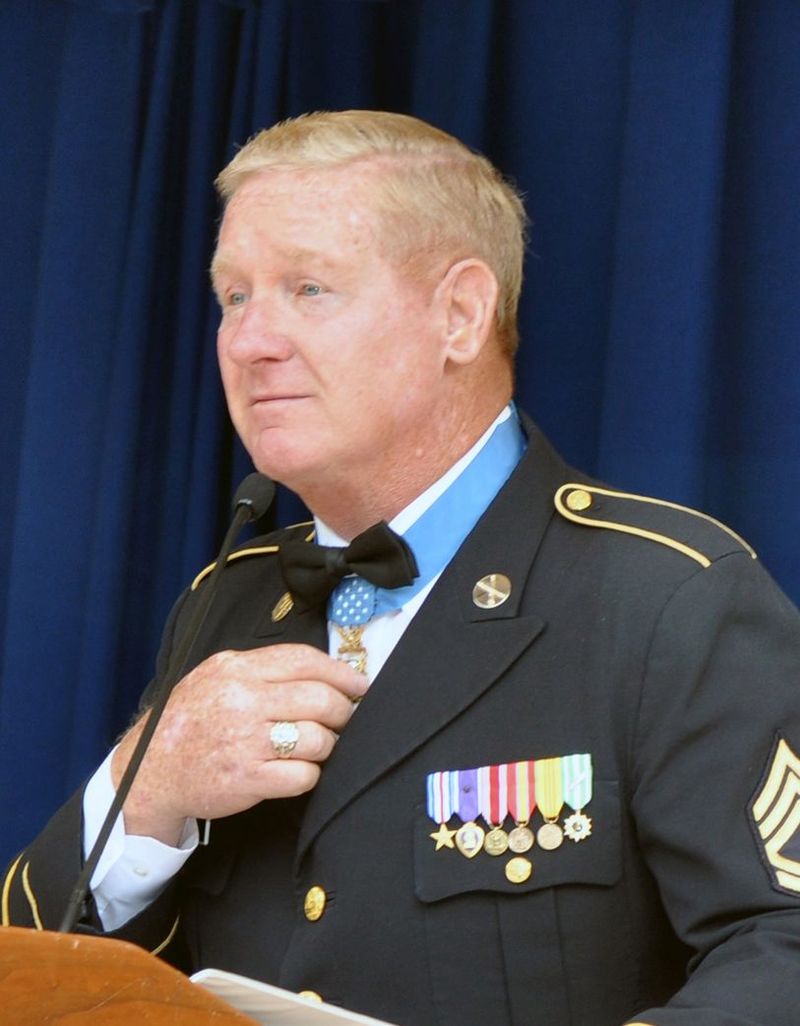 {Excerpted from his Wikipedia Entry: https://en.wikipedia.org/wiki/Sammy_L._Davis}

Early Years: Born in Dayton, Ohio, on November 1, 1946, Davis was raised in French Camp, California. His family had a long tradition of military service; his grandfather served in the Spanish-American War, his father Robert Davis was in World War II, and his brothers Hubert (“Buddy”) and Darrell Davis served in Korea and Vietnam, respectively. Davis attended Manteca High School in Manteca, California, where he was a member of the football and diving teams. He also participated in Sea Scouting in Stockton. After his junior year of high school, Davis’ family moved to Indiana. He graduated from Mooresville High School in 1966.

Military Career: Davis enlisted in the United States Army from Indianapolis, Indiana, in 1965. In March 1967, Davis was sent to South Vietnam as a private first class, and was assigned to Battery C, 2nd Battalion, 4th Artillery Regiment, 9th Infantry Division. On November 18, 1967, his unit at Firebase Cudgel (10.4198°N 105.991°E) west of Cai Lay, fell under machine gun fire and heavy mortar attack by an estimated three companies of Viet Cong from the 261st Viet Cong Main Force Battalion, which swarmed the area from the south and then west. Upon detecting an enemy position, Davis manned a machine gun to give his comrades covering fire so they could fire artillery in response. Davis was wounded, but ignored warnings to take cover, taking over the unit’s burning howitzer and firing several shells himself. He also disregarded his inability to swim due to a broken back, and crossed a river there on an air mattress to help rescue three wounded American soldiers. He ultimately found his way to another howitzer site to continue fighting the NVA attack until they fled. The battle lasted two hours. Davis was subsequently promoted to sergeant and received the Medal of Honor the following year from President Lyndon B. Johnson.[8] After he was presented the medal at the White house ceremony, Davis played “Oh Shenandoah” on his harmonica in memory of the men he served with in Vietnam. Davis retired in 1984 due to his war-time injuries.

Later Years: In 1994, footage of his Medal of Honor award ceremony was used in the film Forrest Gump, with actor Tom Hanks’ head superimposed over that of Davis. On July 4, 2010, Davis helped celebrate the 100th birthday of the Boy Scouts of America at Arlington Park. Davis entered scouting at the age of 9. He has also been honored by the Joe Foss Institute for his dedication to serving America.

His Living Legends Video can be seen on YouTube:

Lieutenant Colonel Joe Jackson, U.S. Air Force, received his Medal of Honor citation for the Vietnam War in 1968: "For conspicuous gallantry and intrepidity in action at the risk of his life above and beyond the call of duty. Lt. Col. Jackson distinguished himself as...